You Have No Power Over Me 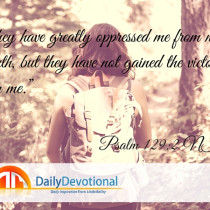 Psalm 129:1-8
Reference: ““they have greatly oppressed me from my youth, but they have not gained the victory over me.” Psalm‬ ‭129:2‬ ‭NIV‬‬
Explore: People can have great power over others. Unfortunately, there are times when this power is used to pull down and destroy rather than build up.
I used to work with someone who was very engaging and dynamic. I was initially drawn to him and his influence, however, I soon discovered he used his power to control others to get his own way.
And I found out the hard way too. He used his words to manipulate the ministry I was doing at the time and the people I was working with.
Upon discovering his divisiveness, I was so disappointed. I wanted to throw in the towel and just give in. But then I realised that someone like that should not be allowed to have that kind of decision-making power over me.
Yes, the near future was hard to endure, but I knew my long term victory was through Christ who gives me strength.
Application: The Psalmist puts it beautifully, “They have greatly oppressed me… but they have not gained the victory over me.”
It is my hope that this is the case for me too. I’m so easily swayed by the opinion of others, but I need to keep my victory firmly in God’s hands, not in the hands of those who may tear me down.
Let’s take some time to consider where we are putting our hope for victory and make sure we are allowing the right people to have influence on us.
Prayer: Lord, yours is the victory in our lives. May we focus on You for empowerment and courage. Amen.
Who or what are you allowing to have victory in your life?