Writing On The Wall 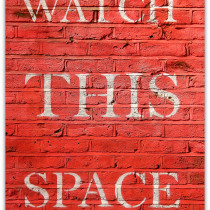 While everyone else could see the writing on the wall, this girl had been blinded to what would happen.

Reference: “But they would not listen and were as stiff-necked as their ancestors, who did not trust in the Lord their God.” ‭‭2 Kings‬ ‭17:14‬ ‭NIV‬‬

Explore: My daughter was updating me on a friend of hers. They used to be quite close but had gone their separate ways after her friend got a new boyfriend.

My daughter could see that this guy was not one to stay around, but her friend was besotted and so could not be told otherwise.

Sure enough, after three years of being together, spending all her money on things that he wanted and after even having a child together the guy has picked up and moved on. Needless to say, my daughter’s friend is devastated.

While everyone else could see the writing on the wall, this girl had been blinded to what would happen.

Application: When the Israelites turned away from God the writing was also on the wall. They had been saved in an incredible way by the One true God.  However, given the chance to follow other gods, they took it.

God had shown them what life was like without Him, He even sent prophets to tell them how they should live, but they were not to be persuaded. There was no surprise when God “removed them from his presence.”

The amazing thing was that it took God so long to do so.

Let us learn from the Israelites folly. Let us not find out what it is like to be removed from God’s presence but let’s continue to press into Him so we can witness the glory of what it is to live with the Almighty by our side.

Prayer: Lord, may we not turn from You and follow something else that seems to shimmer at the time. You are the One. Amen.

What would life be like for you without God in it?