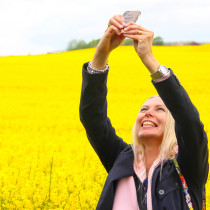 All they are concerned about is what other people think of them.

Reference: “As the ark of the Lord was entering the City of David, Michal daughter of Saul watched from a window. And when she saw King David leaping and dancing before the Lord, she despised him in her heart.” ‭‭2 Samuel‬ ‭6:16‬ ‭NIV‬‬

Explore: I live with a young adult who is very conscious of how she looks. She can take hours to get ready, and that’s just to go to the gym!

Her friends are very similar. They all have hair extensions and skin tight dresses and their favourite pastime is taking selfies!

It’s a funny word “selfie”. Even though they may be taking a photo of themselves, all they are concerned about is what other people think of them.

Application: If selfies were a thing in the Old Testament then I think Saul’s daughter, Michal, would have taken lots of them. She was very conscious of how one looked and what other people’s perceptions were.

When David put aside other people’s opinions and just worshipped God with free abandon Michal was the first to criticise him.

Unfortunately, for too long, I have been a Michal rather than a David. I look to other people for approval and care about my outer appearance rather than what’s in my heart.

While I am sad for Michal it is such an important reminder for me to focus on God rather than caring about other people’s opinions.

Prayer: Lord, may I keep my eyes fixed so firmly on You that I don’t even notice the rejection of others. Amen.

Would you classify yourself as more of a David or a Michal when it comes to thinking about other people’s opinions?