Time To Grow Out 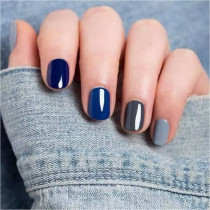 For my sister’s wedding we all got our nails done at a salon. I usually just clipper my nails very short so it was a bit of a big deal for me to even go into a nail salon.

There’s a new product called SNS. It’s like acrylic nails but it’s meant to be better and healthier for your nails. It means they actually put layers of colour and glue on your nails and it never comes off. I knew I would struggle getting back to the salon a couple of weeks later to get it removed but my vanity took over and I decided to get SNS to make my nails look beautiful.

Well, my nails did look good for the day. And they even looked good for two weeks after. They didn’t, however, look very good after that. As my nails grew the colour grew out with them until I had two tone nails – and not in the cool way!!

I finally got back to the salon and had the SNS layers removed from my nails. They looked much better. But what I hadn’t anticipated was how damaged my nails would be underneath. Because of the filing that had to be done to the nail to put the SNS product on and then to take it off, my nails were much thinner.

Now as they grow beyond my nail bed they chip and break easily causing me to have jagged nails that catch on everything.

Twelve weeks later and my nails have half grown out from where they applied the SNS. If I look closely at my nails I can see the new nail is thicker and the front of my nail is still thin and delicate. I had no idea it would take this long to recover from having my nails done!

Life often comes with consequences. While having rubbish nails for a couple of months doesn’t change my life, it does remind me that my decisions have on-going repercussions.

We don’t always know what the consequences may be and we can’t always predict how life will turn out, but we have been given wisdom and advice for a lot of situations. Take my nails for example. If I had have done a little research I would have discovered how SNS is applied to the nails. It would makes sense that filing would thin my nails. And, therefore, the new growth would be a different thickness to the nail that had been tampered with.

Often we jump into things without thinking or doing any type of research. We don’t even stop to pray about it. And yet the ramifications on our lives afterwards can be long lasting.

Let’s stop and think more often. Let’s not just think about the here and now but envisage how we would like to live both now and in the future.

Lord, You are guided by grace and wisdom. May we not be hasty in our decisions but think through how we can live well in all we do. Amen.

When has one of your decisions had a long lasting effect on your life?

Love your devotions Linda
We have been using them for a long time. Many thanks indeed
Just updated yo iOS 11 now we cannot get them due to this new Apple op system.
We will try your direct link via your home page
Blessings to you all