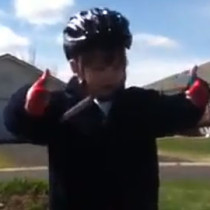 At the time of writing this, over two and half million people have watched the clip and listened to the motivation given by a child.

Reference: v.11 Therefore encourage one another and build each other up, just as in fact you are doing. (TNIV Bible)

Explore: There’s a viral video going around at the moment where a little boy has just learned to ride his bike and his father is capturing the footage.  The dad asks the young boy if he has any words of wisdom for other kids who are learning to ride their bikes.  The little man turns to the camera and presents a motivational speech that would inspire anyone!  He tells us to believe in ourselves, to just keep practicing, and finishes with a grand, ‘Thumbs up everybody’.  At the time of writing this, over two and half million people have watched the clip and listened to the motivation given by a child. It’s priceless.

Application: When Paul was writing to the Thessalonians he was giving a similar motivational speech to them as this young man.  Sure, Paul didn’t get many hits on youtube, but his letter would have brought joy and inspiration to the readers; encouraging them to keep going in their faith.  While it’s good to be able to ride a bike, may we take encouragement from a young child, and a much older apostle: encourage one another, you can do it… thumbs up!

Prayer:  Lord, we are so quick to pull people down and see their flaws.  May we look to encourage others today and lift them up. Amen.

Who could do with some encouragement today?