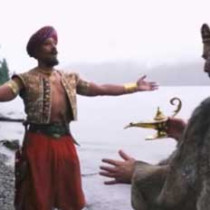 The genie was taken aback by the king’s response

Reference: v.6 I offered my back to those who beat me,
my cheeks to those who pulled out my beard;
I did not hide my face
from mocking and spitting. (TNIV Bible)

Explore: I have started to watch the series, Once Upon A Time. It is an American fantasy drama series that brings all our well-known fairy tales into a modern day town.

During each episode there are flash backs to the original fairy tales and a reminder of what happened in our childhood stories. There is often a slight change to the tales I remember, but it’s all for the sake of a good drama series.

In a recent episode, Snow White’s father, the ruler of a kingdom, found a lamp. Upon picking it up a genie came out and granted him three wishes.

I immediately started to think what the king would ask for. Would he want more riches or greater authority? And if I was granted three wishes would I ask for the same?

The king, however, did not take long to respond to the genie. He said that he had everything he needed, he was happy, he had a wonderful daughter and he was content with his position in the world.

The genie was taken aback by the king’s response, and was even more surprised when the king used his wishes to free the genie from his bondage and give him, a mere slave, the whole wish for him to do with as he pleased.

I, too, could not believe the king’s response. Even though he had a lot in his life most people would still wish for more.

Although this was just a tale in a drama TV series, I felt ashamed upon hearing the King’s response. I know that if I had have been granted these wishes I would not have been as gracious about my lot in life and would have selfishly kept the wishes for my own reward.

Application: Although I know I have everything I need in having Christ in my life, my desire for more would have become too much to give my wishes away.

We regularly read in the Bible how godly people have responded to difficult situations. I like to think that I would do the same if confronted by the same challenges, however, I know that I am weak and easily swayed.

The prophet Isaiah writes of one who held fast in the face of adversity and persecution. Would I be so strong when faced with such challenges?

I guess we never know until we experience it ourselves, however, this TV series reminded me of how much I truly have. I am so blessed with family, friends, a home, food, a great job, and a hope that can bring me through any trial that comes my way. While my selfish nature looks for more I know I should be content with the grace I have received from Christ.

Prayer: Lord, our nature is to look for more in our lives. Help us to be thankful for all that we have and know that Your grace is enough for us all. Amen.

How would you respond if you were granted three wishes?