This Time I’m Playing To Win 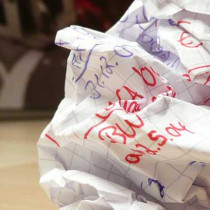 You would play the game over and over and the winner was the person who won the most rounds in a certain period of time.

Reference: v.13-14 “Woe to you, teachers of the law and Pharisees, you hypocrites! You shut the door of the kingdom of heaven in people’s faces. You yourselves do not enter, nor will you let those enter who are trying to. (TNIV Bible)

Explore: When I attend a conference or a seminar I’m all up for audience participation. While it can be a little scary to begin with, these are often the moments I remember the most.

Over a decade ago I went to a conference based around Church Ministry. I cannot remember what the theme of the conference was, who was speaking, or even the particular seminar I had selected, but I certainly remember the audience participation.

The speaker taught us a quick little game we could do on paper in pairs. You would play the game over and over and the winner was the person who won the most rounds in a certain period of time.

The speaker gave us 60 seconds to play as many rounds as possible. The person at the conference who won the most rounds would win a ticket to the conference the following year.

We all faced our papers in anticipation for our time to start and worked diligently for the minute the game lasted.

When the 60 seconds was over, I had only won four rounds while my opponent (a lady I’d never met before) had won about six. Either way, I was a loser!

The speaker then asked the room who had won the most rounds. My opponent and I were quickly overtaken as someone yelled out that they had won 13 rounds. I was impressed by this and thought they must have won all the games played during the 60 seconds. However, my amazement was not to stop there.

As the speaker went around the room, we discovered that some people had won 30, 50 and even over 100 times. This was remarkable, as we had all been given the same amount of time.

We soon discovered, however, what had taken place. Instead of acting as opponents in the game, pairs had worked together, allowing one person to win all the rounds so that they could gain the prize at the end.

I was impressed at their quick strategy, but also ashamed that I had viewed this game as a competition and not as an opportunity to let someone else shine.

Application: When Jesus watched the leaders of the church during His time on earth, He was not impressed by everything that He saw.

They were often selfish, greedy and lacking in integrity. Let’s just say that if they were playing the seminar game mentioned above, they would have been out to win rather than blessing someone else with the prize!

Jesus was not backward in expressing His disappointment with the leaders, even to the point of calling them hypocrites and snakes. Jesus was not one to fly off the handle without good reason, and so, the actions of the Pharisees that Jesus witnessed must have been shameful, especially seeing as they were meant to be God’s representatives.

It’s often easy to read about the Pharisees and feel better about ourselves, however, each one of us is a representative of God here on earth. We are all called to have integrity and offer justice, mercy and faithfulness.

The simple game at the conference has not been the only time I have thought of myself above others.  It’s a challenge I constantly face. We all have our hurdles that can trip us up in our faith, but we must continue to look to Christ’s life and serve Him with all our hearts.

Prayer: Lord, forgive me when I put my own needs before the needs of others. Amen.

What is a common hurdle that trips you in your faith?

Hi Linda,
What was the name of the game you played? I love playing games and would love to know how to play this one.

Do know how to play “Spoons”? It’s a card game that uses spoons from the cutlery drawer.