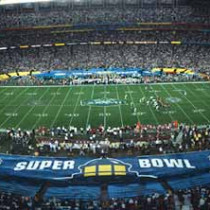 At the end of the day half the crowd are happy and the other half are disappointed.

Reference: On the next Sabbath almost the whole city gathered to hear the word of the Lord. (Acts 13:44 NIV)

Explore: The Super Bowl is one of the most watched sporting games. Companies pay millions of dollars to have their advertisements play during the game on this one day because they know so many people will see it.

At the end of the day half the crowd are happy and the other half are disappointed. Only one team can win and the results are final until the next season.

Explore: When Jesus walked this earth it was reported that thousands of people came out to hear Him. This was true of His followers once they continued on His ministry too.

In this chapter of Acts we hear of the whole city gathering to hear Paul and Barnabas speak.

The great thing about preaching the word of God is that everyone can receive Good News. Jesus’ message does not exclude half the crowd, but gives hope and grace to anyone who will receive it.

Prayer: Lord, it’s great to have other interests in our lives, but let’s not forget that You are the number one. May we be open to Your message, enthusiastic to hear more, and dedicate our time to worshipping You. Amen.

How can we follow Christ as enthusiastically as a fan follows a sports team?