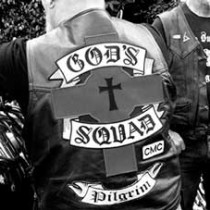 Nothing I said could calm them down or curb their enthusiasm to communicate with the riders.

Reference: When they saw the courage of Peter and John and realized that they were unschooled, ordinary men, they were astonished and they took note that these men had been with Jesus. (Acts 4:13 NIV)

Explore: My boys – four and six years old – are always looking out for motorbikes when we are driving in the car. It doesn’t matter if it’s a Harley Davidson, a dirt bike, or even a scooter, my boys are always excited to spot a two-wheeled mobile.

They are quick to nominate whose bike it should be and will often try to get the drivers attention so they can say hello. This is never very successful as the rider is often concentrating on the traffic and cannot hear my boys cries through their helmet.

The other day we found ourselves in heavy traffic near the city. I heard squeals of delight as two motor bikes pulled up beside us.

The men who were riding the bikes were guys with long beards, big bikes and well-worn, black leather jackets. I got a little nervous as I knew my boys would want to interact with the men and they didn’t look like the kind of guys who bothered much with children.

In no time at all my boys were getting as close to the open window as their seat-belts allowed and waving their arms to get the bikers attention. Nothing I said could calm them down or curb their enthusiasm to communicate with the riders.

It didn’t take long for one of the men to turn to notice my boys drooling over his bike, but his reaction took me by surprise. As soon as he looked over he gave the boys a big smile, he got his mate to give the boys a big wave and then he revved his bike, sending my boys into a fit of excitement.

When the traffic finally started to move again, the bikes were able to make their way through the traffic, and I noticed a familiar crest on the man’s jacket. He was part of the God Squad, a Christian bikers association. While I had jumped to the worst assumption about these men, they were witnessing to a whole group of people whom I would never connect with.

Application: It is easy to jump to conclusions about someone based on their outward appearance. However, this is something that we learn not something we’re born with.

“No one is born hating another person because of the colour of his skin, or his background, or his religion. People must learn to hate, and if they can learn to hate, they can be taught to love, for love comes more naturally to the human heart than its opposite.”

In my “mature wisdom” I tried to discourage my boys from interacting with these men on bikes, even though they were a safe distance away and were with me in the car. Yet, it was my young boys who didn’t see the ruggedness of their looks, but saw them instantly as friends because of their common interest.

Jesus did not judge people from their outward appearance. Others were amazed and intrigued at the people choices Jesus made.

That’s true for us today too. Jesus has never been one to build a clique from the most famous, most popular and most beautiful. He accepts all who open their hearts to Him. We’re a motley crew, however, with His power within us, we can change the world.

Prayer: Lord, forgive me for the constant judgements I make of others. Give me Your eyes, so that I may look at people’s hearts, not their outward appearance. Amen.

Who have you judged harshly?