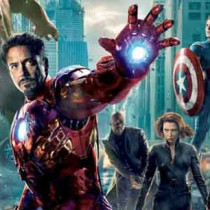 Without giving any of the storyline away, I found it quite amusing to watch Captain America’s reactions

Reference: v.2 Your teeth are like a flock of sheep just shorn, coming up from the washing.
Each has its twin; not one of them is alone. (TNIV Bible)

Explore: The Avengers movie is out in cinemas at the moment and brings together six of Marvel’s Super Heroes in the one film. There’s Thor, Iron Man, Black Widow, The Hulk, Hawkeye and Captain America.

Without giving any of the storyline away, I found it quite amusing to watch Captain America’s reactions to everything that was going on. In a previous film Captain America had been trapped in ice around the 1950s only to be ‘defrosted’ in current day. Therefore, the technology of modern day is still a mystery to him.

During the film the other characters would make reference to mod-cons which would be lost on Captain America. However, at one point their leader mentions something along the lines of someone ‘carrying on like monkeys’ and Captain America gets really excited because he understands that metaphor!

While it would be hard to keep up with all our modern slang and current references it was funny to see the Captain’s eyes light up when he did understand a reference.

Application: When I read through Song of Solomon I become well aware that it is written in a time well before mine. If my husband told me that I had teeth like a flock of sheep I think I would be quite offended!

However, if we look into the metaphor used we see that the writer of this passage is saying that his love had beautiful white teeth that were probably quite straight and even.  Not a bad compliment to give to a lady.

Although at first glance this verse may not have made much sense to me, once I looked a little deeper I could see what was being said and its significance in the whole passage. This is not the first verse I’ve read from the Bible that needed a little more investigation.

The Bible is full of wisdom and insight, but it’s important that we give it the time and reflection that is needed to get a deeper Godly understanding to all that it has to offer us. Taking the next step in relating it to our lives is what makes it come alive and impact our world.

Prayer: Lord, Your word is living and active. May it come alive in our lives today. Amen.

How can you live out God’s Word today?