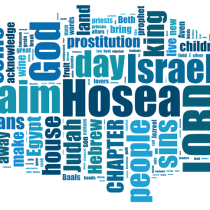 Reference: As marauders lie in ambush for a victim, so do bands of priests; they murder on the road to Shechem, carrying out their wicked schemes. (Hosea 6:9 NIV)

Explore: Being a part of the foster system, we have seen and heard some disturbing stories. Children who were abused and neglected by their parents and left to fend for themselves.

While no child should have to endure such pain I think the part that is most confronting to me is that their parents were involved. They are the people who should love and cherish them the most, and yet, they are abused and forgotten.

Application: Unfortunately, this is not the first time God has had to witness injustice. Time and time again he sees people who should rise to their responsibility, but they fail him.

In Hosea we read of the rebellious people, even the priests turned from their godly ways.

Those who have the most to be thankful for were not respectful of God and His laws. We often fall into that same boat too.

God shows us unconditional love and we often turn from Him. We may not be the worst person in the world, but that is not who God is comparing us to.

Let us not gauge our standards by those who do wrong, but let us aim to raise our responsibilities to those of Christ.

Prayer: Lord, we all have a part to play in bringing people into a closer relationship with You. May we not shirk our responsibilities but rise to the challenge. Amen.

How are you going in fulfilling your responsibilities?

You are living it. Well done.