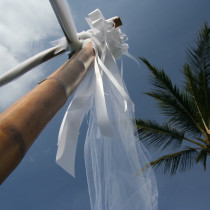 Don’t underestimate their hope in a God who offers love and grace.

Reference: “and Jeroboam said to his wife, “Go, disguise yourself, so you won’t be recognized as the wife of Jeroboam. Then go to Shiloh. Ahijah the prophet is there—the one who told me I would be king over this people.” ‭‭1 Kings‬ ‭14:2‬ ‭NIV‬‬

Explore: Through my ordination as a minister of religion, I have the authority to officiate weddings. It has been interesting to look back and realise that almost half the weddings I have performed have been for couples who were not connected to a church.

Journeying with a couple in the lead up to their wedding is a real privilege and it’s a great opportunity to hear where people really stand in their faith and with their beliefs.

Although these non-church couples are only looking for a civil celebrant, I explain that as a minister of religion, I do this ceremony before God and feel it’s important to say a prayer of blessing over the couple during the ceremony. I often think this may be a sticking point for these non-religious couples but it’s quite the opposite.

No matter what most people believe, they like the idea of having a supernatural covering over them and their future.

Application: King Jeroboam had disobeyed God in a big way. He had also gone out of his way to set up worship places for other gods. But he still knew there was something significant about the One true God.

When his son became sick it was the God of his forefathers whom he sought understanding from. And it was truth he received.

When it comes to conversations with friends, family or acquaintances about faith, don’t underestimate their hope in a God who offers love and grace. They may not know our God is the best thing they could ever hope for, but it’s likely they are searching and more than happy for you to cover for them.

In all the people I have asked to pray for, no one has ever said no. Don’t hold back when you have the chance to bring the Creator of the Universe to His created.

Prayer: Lord, You are better than anyone or anything to calm nerves, comfort the grieving and heal the sick. May we never stop coming to Your feet to seek fulfilment. Amen.

Who could you be praying for today?