Standing Out From The Crowd 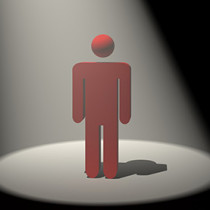 A young girl is walking through a store and catches the eye of a modelling agent, who asks her to audition.

Reference: A certain man from Cyrene, Simon, the father of Alexander and Rufus, was passing by on his way in from the country, and they forced him to carry the cross. (Mark 15:21 TNIV)

Explore: It’s the dream of many a teenager to be plucked out of obscurity and placed in the limelight. It happens to a rare few, but we revel in the stories that we hear.

A young girl is walking through a store and catches the eye of a modelling agent, who asks her to audition. A young guy is hanging out with friends at the mall and a casting director tells him that he has the perfect role for him to play.

An everyday person goes on reality TV to sing and in just under 10 weeks becomes a recording artist. Being noticed from the crowd is an exhilarating thought.

Application: When a man named Simon was walking into town, he was plucked from obscurity and is still mentioned 2000 years later. He didn’t win an award and he didn’t get some amazing performing contract. He was asked to carry Jesus’ cross.

This wasn’t a figure of speech, but Mark 15:21 mentions Simon literally carrying the cross, this means to Jesus’ death.  I wonder what made Simon stand out in the crowd.

Was it his strong physique? Was it that he looked on Jesus with compassion? Was it purely random?

The task he was commanded to carry out was not a pleasant one, and yet, it threw him into the most powerful moment in history.

When it comes to carrying Jesus’ cross I hope that I can stand out enough to be chosen. To fulfil God’s mission I don’t have to exude talent or stand out physically, I just have to be willing to fill the Christ-like hole in our world today.

Prayer: Lord, You have given us the purpose to continue Jesus’ mission and be Christ to our world today. May we be willing to stand up to the task as You give us the strength to carry that cross. Amen.

What cross are you currently being asked to bear?