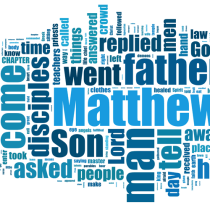 Now that’s a spoiler that I’m more than happy to hear.

Reference: v.21 And while they were eating, he said, “Truly I tell you, one of you will betray me.”  (TNIV Bible)

Explore: I really hate spoilers. This is when people reveal what is going to happen in a movie or a TV show before people have had the chance to watch it.

I’m so sensitive to spoilers that I don’t even like watching a movie trailer for a film that I’m going to watch. Sometimes the previews themselves are spoilers as they basically outline the whole plot minus the last scene!

If a spoiler does happen to slip through my “spoiler radar”, I end up spending the whole movie waiting for that specific event to occur. Even if there are lots of different plot lines going on, all I can concentrate on is the one event that has been prematurely revealed to me.

What is meant to be an enjoyable outing ends up being a waiting game as I anticipate scene after scene.

Application: It seems that the disciples were not as aware of spoilers as I am. There are a number of times when Jesus speaks quite openly about what is to come.

Here in Matthew 26 Jesus speaks of someone betraying him. Later on, he mentions that he will make an early departure, he predicts Peter’s betrayal and he highlights the words of the prophets that spoke of Him. Jesus was the worst ever for spoiler alerts!

And yet, it seems that his warnings were so far from the disciples minds that they did not realise what was happening.

There are times in our lives when we would like a spoiler for a situation we might be going through. We listen out for a prediction or hint at what might happen to us, but they are not always clear.

At these times we are often like the disciples – only listening out for that which we want to hear and not aware of the reality that is before us. One thing we do know for sure, however, (and BEWARE, I’m about to reveal a spoiler) is that Jesus loves us and will always be there for us.

Now that’s a spoiler that I’m more than happy to hear.

Prayer: Dear Lord, thank you for the assurance that we have of knowing Your love is forever. May we not want an easy prediction in our lives, but to live in accordance with Your word. Amen.

What is something that you need to hear and remind yourself of today?