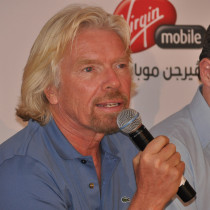 Many of his teachers thought he was stupid and lazy.

Reference: “Later, Joseph of Arimathea asked Pilate for the body of Jesus. Now Joseph was a disciple of Jesus, but secretly because he feared the Jewish leaders. With Pilate’s permission, he came and took the body away.” John‬ ‭19:38‬ ‭NIV‬‬

Explore: Sir Richard Charles Nicholas Branson has a net worth of 5 billion USD. He is a businessman who founded the Virgin Group, which controls more than 400 companies.

Some of the companies Branson has formed are Virgin Atlantic Airways, Virgin mobile and Virgin Australia.

And yet, when he was a child at school many of his teachers thought he was stupid and lazy. He later understood that he had struggled with dyslexia but he continued to work on his dream of becoming an entrepreneur.

While Branson’s situation may not have been ideal, and his teachers may not have seen his potential in his early days, he has gone on to make quite an impact on the world today.

Application: We needn’t make our current situation impact our future. Branson did not allow his condition to stop him from becoming a successful businessman.

There are times when God uses us, even when we don’t feel qualified at all. We only see our inability but God sees our value.

When Jesus had died on the cross two men took his body and buried it. These two men were hardly model disciples.

One only secretly followed Jesus and the other only came to Jesus at night so he was not seen. Yet it was these men God chose to secure Jesus’ body after He was removed from the cross.

God has an amazing way of bringing out our talents and abilities, even when we are hesitant to do so ourselves.

You may feel insignificant or not worthy, but God has a way of bringing out the best in you. You just need to be open and willing to take the risk when the opportunity arises.

Prayer: Lord, make us bold when we feel shy and insignificant. May we break our mould when it comes to representing You. Amen.

What area of your life do you feel insignificant or lacking in?