Shape of an ‘L’ on Her Forehead 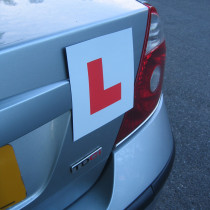 Linda is having a break over the Christmas holidays. Here is one of her most liked posts:

This became so well known that people would not even need to say the word ‘loser’ but just do the sign for it and everyone would understand what they were meaning.

Reference: v.1  Then I looked, and there before me was the Lamb, standing on Mount Zion, and with him 144,000 who had his name and his Father’s name written on their foreheads. (NIV Bible)

Explore:  A few years ago there was a common trend going around where people would add some sign language when referring to someone else, or even themselves, as being a loser.  They would curl the last three fingers of their hand in, leaving an L shape with their thumb and forefinger.  When referring to a person being a loser they would put their hand, with fingers in L formation, up to their forehead.  This became so well known that people would not even need to say the word ‘loser,’ but just do the sign for it and everyone would understand what they were meaning.  It was such a known part of pop-culture that it was even mentioned in songs and movies .

Application:  It’s no surprise that in our culture something so derogatory took off in a big way.  We’re much more inclined to tear people down than build them up.  What if the ‘L’ formation meant something positive like ‘lovely’, ‘likeable’ or ‘legend’?!  I’m sure it wouldn’t be so cool to do the sign language any more.  In the book of Revelation, John sees a vision where followers of God have His name written on their forehead.  Now that is something that is positive and uplifting.  How great would it be if the ‘L’ shaped fingers stood for ‘Lord’ rather than loser.  Every time you saw someone following God and living out His love in this world, you could give them the ‘L’.  I think we’re maybe a little late to change the meaning of this sign language now, but it’s good for us to think what kind of L word we are portraying in our lives.

Prayer:  Lord, may we live our lives so that we are building other people up rather than tearing them down.  Amen.

What sign is more prominently displayed on your forehead, loser or Lord?