Saved And Then Shunned 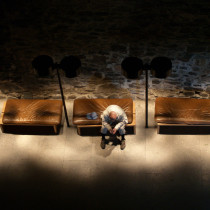 This is a man who had been shunned all his life.

Reference: “Jesus heard that they had thrown him out, and when he found him, he said, “Do you believe in the Son of Man?”” ‭‭John‬ ‭9:35‬ ‭NIV‬‬

Explore: I’ve read this John 9 passage a number of times but reading it through this time I’ve noticed something new.

Jesus healed the blind man, which would have been a life-changing event in this man’s life. But because of the religious leaders’ hatred of Jesus, he ended up getting questioned by them and then thrown out of the synagogue because of his honesty.

This is a man who had been shunned all his life. Due to living with a disability it was unlikely he followed the same path as other boys his age.

As an adult he had to beg for his income and even Jesus’ followers assumed his blindness was the result of someone’s sin.

Finally his eyes were opened and his future now held a whole range of new possibilities. But again he finds himself shunned by those in power.

Surely in this instance he could have just told the leaders what they wanted to hear so that he could be accepted and embraced by the synagogue leaders. But no. He stays true to his story and his experience of Jesus, no matter what the consequence.

Application: There are times when I hold that level of faith in Jesus. But there are other times when my desire to be accepted leads me to other priorities.

When we follow Jesus it doesn’t always mean our life will be easier by worldly standards. It can often lead us on a path of rejection and being ostracised.

But to have our eyes opened by Jesus is worth holding true to our experience. No matter who questions us may we have the strength of this man who was blind, and hold firmly to the truth Jesus has revealed to us.

Prayer: Lord, open our eyes anew to You and Your ways. May we follow You in all we do. Amen.

Have you ever felt pushed aside because of your faith?