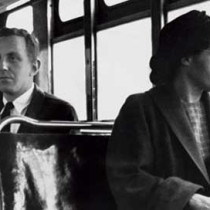 Mrs. Parks quietly refused to give up her seat.

Reference: “By what authority are you doing these things?” they asked. “And who gave you authority to do this?” (Mark 11:28 NIV)

Explore: ‘On December 1, 1955, Rosa Parks, a 42-year-old African American woman who worked as a seamstress, boarded a Montgomery City bus to go home from work. On this bus on that day, Rosa Parks initiated a new era in the American quest for freedom and equality.

She sat near the middle of the bus, just behind the 10 seats reserved for whites. Soon all of the seats in the bus were filled.

When a white man entered the bus, the driver (following the standard practice of segregation) insisted that all four blacks sitting just behind the white section give up their seats so that the man could sit there. Mrs. Parks, who was an active member of the local NAACP, quietly refused to give up her seat.

Her action was spontaneous and not pre-meditated, although her previous civil rights involvement and strong sense of justice were obvious influences. “When I made that decision,” she said later, “I knew that I had the strength of my ancestors with me.”’ (Rosa Parks Story)

Application: Rosa Parks has gone down in history as a woman of courage and great character, who stood up for what she believed in.

What authority did she have to do so? She believed she was just as important as everyone else and she had the strength of her ancestors with her.

We often have big tasks ahead of us too. You are just as important as anyone else and the great thing is that you have more than human ancestors behind you; you have the power of the Almighty God.

That makes you unstoppable!

Prayer: Lord, may we listen to the voice within us that stands against injustice, loves the unlovable, and cares for the needy. May we not be afraid to do the impossible with You by our side. Amen.

What is the big task ahead of you?