Road Rage in the Church Carpark 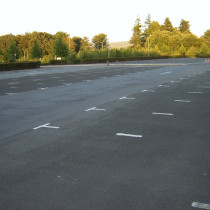 And yet his actions said something very different.

Reference: “When Pharaoh saw that the rain and hail and thunder had stopped, he sinned again: He and his officials hardened their hearts.” ‭‭Exodus‬ ‭9:34‬ ‭NIV‬‬

Explore: I recently saw a humorous video of John Crist driving around a church car park on a Sunday morning. He is running late for church and trying to find a park.
He was coming to church, and mentioned he had been attending for 27 years, so you would assume he was well versed in the actions of a Christian. And yet his actions said something very different.
Some comments made were:
“I have the fruit of the spirit but y’all just need to move!”
“Go ahead and take my parking spot… she probably needs Jesus more than me.”
While this was done for humour (and I did chuckle numerous times) it’s funny because it rings close to the truth.
How often in our own lives do we act differently to what we proclaim at other times?
A parking attendant asks if he’s on the ministry team and he says, “Not today!”
Application: We lack integrity when we say one thing with our words but do differently with our actions.
While Pharaoh did not proclaim to believe in God, he did say he’d let the Israelites go and worship their god. Multiple times he said it, but then turned on his word and refused to let them go.
Although he was not a believer it’s a decent thing to stick to your own word. As believers we are representing God. He does not go back on His word, so we should set the same example.
Don’t say one thing but do another, otherwise we’re lacking integrity just like Pharaoh.
Prayer: Lord, may the words of our mouth reflect the actions of our lives so people will see You living in us. Amen.
How well would you say you are living a life of integrity?