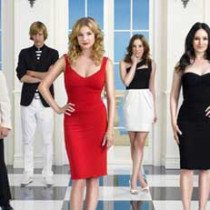 She changes her name and uses her inherited fortune to gain entry into the upper class.

Reference: v.8 May his days be few;
may another take his place of leadership. (TNIV Bible)

Explore: There’s a new series on TV at the moment called Revenge.

It follows the life of a young lady whose father was imprisoned and killed when she was a child. Emily discovers that her dad was set up and plans to take down all the people involved in her father’s demise.

She changes her name and uses her inherited fortune to gain entry into the upper class.  Emily works hard to reveal damaging secrets about the people involved in her father’s past and to make them pay for their indiscretions.

While she gains some successes in her endeavour, she finds that her revenge does not always bring her happiness or contentment.

Application: As I started to read Psalm 109, I was taken aback by its vengefulness. The writer had clearly been wronged and desired great retribution for all that had happened.

Some of the things mentioned were incredibly harsh, and not just to the wrong-doer, but also their family. However, there is a big difference between the psalmist and Emily.

While Emily was intent on acting out her revenge, the psalmist puts retribution in God’s hands. While he certainly puts a few ideas out there as to what he would like to see happen to his enemy, the only action he commits to doing is to praise God.

While I know that I should be more like the psalmist in my actions, I do tend to follow Emily’s lead a little more. There are times when we feel justified in delivering revenge, however, it is not for us to judge.

Next time I am wronged I hope that I can recall Psalm 109 and put justice in God’s hands, not my own.

Prayer: Lord, we feel so much pain when we are wronged. Help us to look above all our emotions and put justice into Your hands. Amen.

How do we deal with our emotions when we desire revenge?

That is a good want .