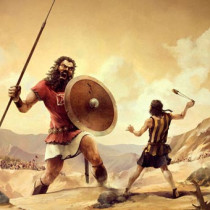 When the same issue continues to raise its head, you have to look in the mirror to see if the issue lies within yourself

Reference: In another battle with the Philistines, Elhanan son of Jair killed Lahmi the brother of Goliath the Gittite, who had a spear with a shaft like a weaver’s rod. (1 Chronicles 20:5 NIV)

Explore: I was recently chatting to a friend who was considering breaking up with her boyfriend. She had recently been in a number of relationships that have all ended in the same way.

She has high expectations on how a relationship should progress. However, the men in her life seem a little tardy at keeping up with the program! When she starts talking about a future they start putting the brakes on and becoming evasive.

I know some girls can have unreasonable standards, but my friend is thinking seriously about her future. What is the point in being in a relationship if you’re not committed to seeing it develop?

When the same issue continues to raise its head, you have to look in the mirror to see if the issue lies within yourself. While my friend’s issues do come from her high standards, I think she is correctly placing her priorities and it’s saving her grief in the future.

Application: One of the greatest stories in the Bible is David and Goliath. David, a small boy, conquered the mighty Philistine warrior, Goliath.

And yet in 1 Chronicles 20, years later, David is still at war with the Philistines. It sounds like a recurring issue that won’t go away. I wonder if David ever looked in the mirror and thought, is it me?!

David continued to fight the Philistines because they were against his God and his people, and that was worth continuing the fight. There are some issues that continue to raise their ugly heads in your life too. You need to decide if they are worth fighting for.

It’s good to look in the mirror to see if there’s anything you are doing to exacerbate it, but it’s a good chance to reassess your values too. What is important to you? Is the issue challenging those values? Constantly fighting something can be a drain, but if you consider it important then it can drive you on to greater things.

Prayer: Lord, when we battle, may we battle in Your name. Amen.

In your life, what is worth fighting for?