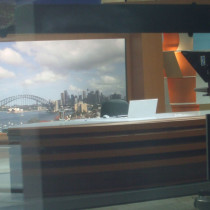 He started in a rural city and is now on prime time television.

Reference: “As for the other events of Amon’s reign, and what he did, are they not written in the book of the annals of the kings of Judah?” ‭‭2 Kings‬ ‭21:25‬ ‭NIV‬‬

Explore: An up-and-coming journalist is starting to make quite a name for himself. He started in a rural city and is now on prime time television.

As is the case with all television presenters, he worked hard to get where he is today.

The problem I have though is that I went to school with him and he was fairly horrible! He would look down on the younger students and liked to get his own way.

Now, here’s hoping he has changed a great deal since he was a teenager, but I can’t help but be reminded that this rather unsavoury person is now in an influential position.

Application: As we read through 2 Kings we hear of many unsavoury people being in incredibly powerful positions. Some last for decades where others are removed in just a few years.

It’s clear to see it’s not just the good and noble people who get the good positions.

I guess that’s when we have to look at where our priorities lie. Do we work hard just for earthly reward or do we pick and choose our actions according to where God would have us?

It’s hard not to feel like we deserve more when we strive so hard to serve God, but we never know the impact our faith position will have on those around us. Even the prophets, in their humility and service, had an impact on the kings of the time.

Let us not look at earthly promotion but focus on all God has in store for us.

Prayer: Lord, may I serve You no matter what position I hold in this world. May I always be true to Your love and grace. Amen.

What influence can you have in your position?