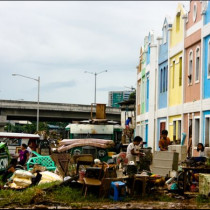 It’s like we think everyone else is perfect, so we have to be as well.

Reference: “ ‘Because they lead my people astray, saying, “Peace,” when there is no peace, and because, when a flimsy wall is built, they cover it with whitewash,” (Ezekiel 13:10)

Explore: There is a slum in a developing country that exists along a main road. This mass of make-shift homes began in a large, run-down concrete building and now spreads out under an adjoining bridge. While the front of the original concrete building still exists, behind is a rabbit warren of corrugated iron that is darkened by the shadow of the bridge all throughout the day.

This is not unusual for a slum, however, there is something different about this particular one. The local council have allowed the front of the original concrete building to stay, even though it is not used structurally.

Why? Because it hides what is behind the tall walls. And even further, they have painted the road side walls in lovely pastel colours, making it look like a contemporary, clean building.

There is thought that this wall gives residents greater pride in their home, but when you step behind the wall and experience a thousand people living under a bridge, it’s hard to see the beauty in a painted wall.

Application: We all have painted walls in our lives, barriers that we construct so that others don’t look deep into the mess within. It’s like we think everyone else is perfect, so we have to be as well.

But these walls create an untrue facade, just like in the slum. I’m not advocating that we should air all our dirty laundry to every single person who walks past, but we should be true and transparent in what we’re going through.

God was very angry when prophets made themselves look better by saying that God had spoken through them. Their spiritual lives were a mess and yet they put up a pastel-coloured facade to make them look better.

God can see straight through the barriers we put up – no matter how pretty we make them look! He isn’t interested in our outward appearance, but wants us to work on what’s on the inside. No matter how much of a mess it may be, God still prefers to see that than a facade.

Prayer: Lord, it seems so much easier to work on the barriers we place up, rather than dealing with the real issues. Give us the courage to become vulnerable so that we can work on being greater servants for You. Amen.

What pastel-coloured barriers do you have up in your life?