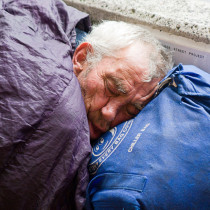 Reference: “The Samaritan woman said to him, “You are a Jew and I am a Samaritan woman. How can you ask me for a drink?” (For Jews do not associate with Samaritans.)” John‬ ‭4:9‬ ‭NIV‬‬

Explore: I could tell the man was struggling financially. I couldn’t confirm that he was homeless but if he had have said he was, it would not have surprised me.

His clothes were filthy and torn in some places. It was clear he had not shaved in at least a week and had not been to the dentist in years.

As he walked past the window of the restaurant I was sitting in, he looked down at the ground and moved slowly with no purpose or intent.

Application: We can determine quite a bit about a person by their outward appearance. It certainly doesn’t tell us everything, but it can give us some indicators of who the person is.

This happened to Jesus and the Samaritan woman for the John 4 passage. Just from their outward appearance the woman could tell Jesus was a Jew.

From the woman’s appearance, and also her actions during the day, Jesus could already tell that this local woman behaved in such a way that she was shunned by her community.

The beauty of Jesus is that He doesn’t stop at the outward appearance. He looks to the heart and the potential of the person.

And so should we.

It is so easy to judge someone by how they look.  If we stop at that, however, we miss so much of who the person is and what they have to offer the world.

Let’s see beyond people’s looks, and be more like Jesus, looking to people’s hearts.

Prayer: Lord, thank You for not restricting our potential by how we look. May we aim for the greater purpose You see within us all. Amen.

How have you been judged by how you look?