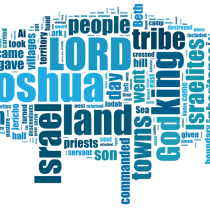 We thought we would just say no, but then thought we should “at least pray about it!”

Reference: v12 On the day the Lord gave the Amorites over to Israel, Joshua said to the Lord in the presence of Israel: “Sun, stand still over Gibeon, and you, moon, over the Valley of Aijalon.” (TNIV Bible)

Explore:  About 5 years ago I was asked to be a leader in our local church.  I had resisted previous requests in the preceding few years, and I thought I would decline this one as well.

My wife was especially hesitant about me taking this position due to the demands on my time that she could foresee… and she was also very sick at the time with Chronic Fatigue Syndrome.  So we thought we would just say no, but then thought we should “at least pray about it!”

We decided to pray in a slightly different way than we had in the past… we went to separate rooms, set a timer and came back after 15 minutes to see if God had said the same thing to each of us.

To my surprise God had ‘convinced’ my wife that I should take up this leadership position (and given her a verse to confirm that we needn’t be worried about her health – God would look after us!).  And he had let me know the same!

Application: This verse in chapter 10 is so incredible – Joshua, in a half prayer/ half sermon (because he did say this in front of everyone) says, “Sun stand still”!  He would have looked like a bit of a fool if his whole plan for battle was to shout at the sun to stand still and then it didn’t (talk about a way of losing the confidence of the people).

But, Joshua knew his calling; knew that God wanted him to lead. God had called him to take the land and defeat the peoples of the land… so shouting out to make the sun stand still was, presumably, quite a reasonable request in Joshua’s mind.

And although I haven’t asked for the sun to stand still recently, I certainly had great confidence in my position as a leader at church, even when the going was tough, because I knew God had called me to it.

Prayer: Dear God, help me not to doubt my calling, help me to trust in your plan for my life when the going gets tough. Amen.

A calling doesn’t come around every day, but God does call us to different tasks… what is your calling?  How can you live confidently in it?