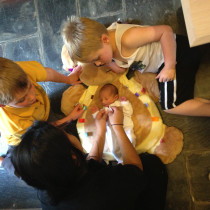 I feel like my family life has been a bit of rollercoaster.

After Cameron and I got married 15 years ago, we decided that as a part of our faith we really wanted our home to be an open, loving home for lots of people. And so after a couple of years we became foster parents and we invited Joy into our home.

She was 13 at the time and as most children who come into the foster care system, she had had quite a difficult upbringing. But she came into our home and we tried to love and care for her as much as we could. And we formed what was family for the three of us then.

Over time Cam and I decided we were really keen to try to have our own biological children as well. Yet, after a nuumber of years we realised it wasn’t going to happen easily or naturally for us. And so, we engaged some professional help. We started a journey of assisted fertility. After many appointments, medications, scans, disappointments and failed cycles we realised that having biological children was not to be the make up of our family.

It was at that time that we paused, we processed, we grieved and then we started to heal. And we poured into our family as best we could, to help Joy have the best life she could have.

As Joy neared 18, she started doing what a lot of kids in care do, she decided to push against people who were in authority over her. And we started to have a lot of conflict in our home. She struggled to live under our care and decided she didn’t want to live with us anymore.

Just after she turned 18, after lots of arguments and disagreements, Joy moved out.

And again, Cam and I found ourselves in that place where we paused, we processed, we grieved and we started to heal.

We still had contact with Joy. We were the only family she had, so she came for Christmas and birthdays. Then Cam and I decided we would open our home again, through foster care, to two boys, Clinton and Cruizie. They were four and five when they came into our house. And boy, did they turn our lives upside down!

We did everything we could just to get through the day. They were just go, go, go! From the moment they got up, to the time their heads hit the pillow at night, they were constant and always. And we had to be constantly aware of where they were, what they were doing, what they were saying, how they were interacting. It was exhausting.

But in time we gradually got into a bit of a routine. They got to know us and we got to know them. And that was what family was for us.

Over the next couple of months we started getting a lot more phone calls from Joy. She had hit the drug scene pretty heavily and had got into a fairly destructive relationship. And so, one afternoon, I drove into the city to a fairly small, dirty, unfurnished apartment, packed all of Joy’s belongings into the back of my car and drove her back home.

And that was a really difficult time for Joy and, therefore, for us too. She loved many parts of her life in the city and she just felt that our suburb was like living in the middle of nowhere!

And our family was different now to when she had left. She struggled with how high needs our boys were, but that was our family and so we continually processed how we could embrace Joy and bring her into that.

A couple of months after Joy moved back home Cam noticed she had posted something publicly on her ex-boyfriend’s Facebook page. It said something along the lines of, “If you don’t believe me, that’s fine. I wouldn’t lie about a baby. And if you don’t want to be a part of my life then I’m better off without you.”

And that’s how we found out Joy was pregnant.

And to say that was one of the lowest times of my life is an understatement. I literally buried my head under my doona and I just cried and screamed, “Why God? Why?” I couldn’t understand how God could allow a young, broken teenager to conceive and yet here I was left barren. And it broke me. And it was like a big black cloud came and sat on my shoulders.

And it was exactly a week to the day we found out, that all of a sudden, instantly, the cloud lifted. And while I had struggled to pray through that time, I knew there were a lot of people praying for us.

And so, for the next seven months, I processed, I grieved, I healed… and I went to every doctor’s appointment, and every scan, and every prenatal class and I was Joy’s support person in the labour ward as we welcomed Jai into our family.

And so, we continued life as our family.

We had moved into our current house as just the two of us, Cam and I, and within 15 months there were now six of us in our home. It was all quite a change.

12 months on, Joy started feeling like she had missed out on her young adult life. And so, she started doing life as she wanted a little bit more – going out with friends, partying, going to the gym – and as she backed off her responsibility of Jai we just filled the gap. For we wanted this little man to have the best life he could have. And we spoke to Joy about it and she realised she was backing off her responsibility and she was quite happy for us to become his primary carers in all practical ways.

After a little while we started having a lot of trouble with our boys. They had been high maintenance the whole way through this time and we loved them and cared for them, but it had got to the point where Clinton, the older of the two, had started making false accusations against Cam. He was saying that Cam was physically hurting him and hurting his younger brother as well.

And it was after that investigation that we made the hardest decision we have ever made, and we decided our home was no longer the healthiest place for our boys to live in.

And so, after three years, one month, two weeks and six days, we said goodbye to our boys. Which was so difficult. But we had to hope it was the right thing for them and the right thing for us. And we still keep in touch with them but again it was another time where we paused, we processed, we grieved, and we started to heal.

The next year or so we just poured our lives into Jai. He did everything with us, went everywhere with us and it was the three of us always. Joy still lived with us and she was still mum, but we did everything together with Jai and that was family for us.

Just before Jai turned 3 years old, Joy decided, what seemed like overnight, that she didn’t want to live with us anymore and she wasn’t going to leave without Jai. And so, we started the process of helping her take back responsibility for caring for Jai.

And again, our hearts broke. We loved him so much and we knew we had so much to offer him, but we were not the biological parents and we had very little say.

Thankfully we had a few months to help him process and try to transfer his affections from us over to his mother.

And we still see Jai all the time and we care for him part-time as Joy works. He is still a big part of our family but it’s different now that he’s moved out. And again, we paused, we processed, we grieved, and we tried to heal.

While that was all happening, I started to feel quite unwell. I hadn’t felt well for a little while and had pains in my body that I had never experienced before. And so, I did what all sane adults do when they’re not feeling well, and I went to Google! I typed all my symptoms into the internet because I thought I might have breast cancer. And I wasn’t sure how I’d be able to cope with that.

But as I typed in the symptoms the results didn’t quite add up, so I just left it for a little while longer.

A week later Cam and I were travelling in the car together and I turned to Cam and I said, “I think I’m pregnant.” Cam was very surprised. So as soon as we got home I found an old pregnancy test in the bottom of one of my drawers. It was out of date, that’s how long it had been since we’d even entertained the thought! But we thought we’ve got nothing to lose, let’s use it.

Before I had even left the bathroom, the test had shown positive. But it was out of date, so we could not trust it and it was not possible! So Cam got in the car and at 9.30 at night he drove to the shops and bought, not one but three pregnancy tests and brought them home.

And after the second positive test we started thinking, wow, maybe this is a reality for us.

And so, we discovered we were miraculously pregnant. Without any extra prayer that we had done, or any planning or any expectation. And sure enough, seven months later little Mitchell entered our family… the fifth child into our family.

And as I held him in the delivery ward for the very first time, I marvelled that the feelings I had for him were very similar to the feelings I have had for every single one of the children that has come into our family.

And so, we pour into Mitchell, like we have poured into all the children in our care. But I praise God that I don’t have to hold him lightly as no department or process or biological parent can take him away from me.

Lord, we each hold a different family journey. May we remember that, no matter what we go through, You are always there with us, every step of the way. Amen.

How has your family experience impacted your relationship with God?