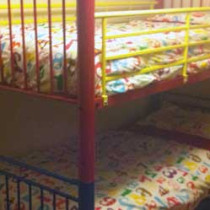 Reference: v.17 I will sacrifice a thank offering to you
and call on the name of the Lord. (TNIV Bible)

Explore: With our foster family looking to expand, we were in need of some bunk beds. I decided to write our need up on my Facebook account as I thought I might have a friend who wanted to get rid of some bunks.

A few people made some enquiries and gave us some suggestions, but after a couple of days we hit a dead end. That was until a friend of mine called asking if we were still in need of some bunks.

They had some friends who were looking at getting rid of their bunks and they would be happy for us to take them. Not only that, but my friend was willing to pick them up and drop them to our house.

This was SUCH a generous offer. They drove from the far north of Melbourne to a far eastern suburb just to pick up these bunks for us. I was so humbled and thankful when they dropped them to our house.

They even stayed longer to help us assemble the bunks so they knew they would be safe for the children. No sooner were the bunks up than our friends were out the door and off home again.

They truly were our bunk angels!

As they drove off down the road I felt so blessed by their generosity that I realised I had not thanked them sufficiently. While I spoke favourably to them, my words just didn’t seem enough for all they had done for us. Should I have given them petrol money? A box of chocolates? My first born child?!!

Application: This amazing act of love left me flowing with words that just didn’t seem sufficient for the gift I had received. This feeling happens all the time too, when I think of the generosity of my Lord.

I recognise the gifts that God gives to me every single day, and yet, I rarely stop to give him a ‘sacrifice of thanks’ in return. Sure, I thank Him before I eat food by saying grace at each meal and I sing songs of praise during a church service on Sundays, but is this really enough thanks to the One who gave me all I need?

Let’s face it, what could we give to God that He doesn’t already have? The thing that gives Him most satisfaction is if we act like His Son as a way of dedicating our lives to Him.

Living like Jesus is a way that we can thank our Saviour for all He has done for us. Each time we put others before ourselves, we stop gossiping about our colleagues, we give generously to those in need… this can be a way of giving thanks back to God, the One who gave us everything.

Prayer: Lord, I know that every single day I think selfishly about what I can gain. As a way of showing You thanks may I consider others before myself and give You the gift of loving others. Amen.

How can you show your thanks to God today?