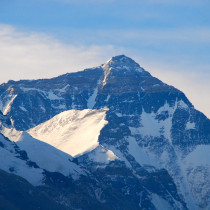 Reference: “Pharaoh’s officials said to him, “How long will this man be a snare to us? Let the people go, so that they may worship the Lord their God. Do you not yet realize that Egypt is ruined?”” Exodus‬ ‭10:7‬ ‭NIV‬‬

Explore: Mt Everest is the highest peak in the world, measuring 8,848 metres above sea level. In true human nature there are some people who desire to conquer this great mountain and many who train to reach its base camp (at an altitude of 5,364 metres).

While it’s good that people love a challenge, this one comes at a great cost. At high altitudes breathing is difficult, the climb is arduous and people have lost their lives.

While I have been to Nepal and flown around Everest I’ve never been so keenly aware of its dangers than at the time of writing this post. You see, currently a friend of mine is on that mountain. She is a part of a hiking group heading up to base camp.

Each time she’s in internet range we will receive a message from her telling us she is safe. But she doesn’t always have access to the internet and so we are left to wait between messages.

We were shocked yesterday to hear a man, who lives in the same city as us, died up on Mt Everest. Sadly enough this happens quite regularly but it hit closer to home for us who currently have a friend up on the mountain.

You see, it’s personal for us now. A death would always have been tragic but at this point in time we feel a significant connection to anyone up there.

Application: When the Israelites were trapped in slavery, the Egyptians would have heard about their God. Moses was asking for the Israelites to be released to go and worship their God and explained how powerful He is.

They may have known about Him to begin with, but once the plagues started coming across the land, it was suddenly personal. God’s power was now affecting them directly and they started to sit up and take notice.

While Pharaoh’s heart was hardened, the people suffered. And even though the Israelites were their slaves and carried the brunt load of their labour, they were keen to see them leave. It was now personal.

Until God affects our lives personally, our understanding of Him is just head knowledge.

People can study God’s word and talk to His people but until they open themselves to experience Him then it’s just surface knowledge, it’s not personal belief.

Let’s not sit back and just know God on the surface but let’s put hearts up on the mountain so that God becomes real for us today.

Prayer: Lord, make Yourself known to us today so we may truly experience You. Amen.

When have you had a personal encounter with God?