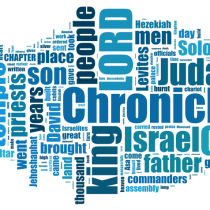 It blows me away that this dream was planted so early in my life.

Reference: In the eighth year of his reign, while he was still young, he began to seek the God of his father David. In his twelfth year he began to purge Judah and Jerusalem of high places, Asherah poles and idols. (2 Chronicles 34:3)

Explore: I was recently chatting to one of my colleagues at work and we were talking about what we wanted to be when we grew up. He recalled getting a microphone and tape deck as a child and making up a radio station with his best mate. It’s incredible that, 35 years later, he has now worked in radio for over 20 years.

This reminded me of my own little performance as a child. As soon as I learned to read out loud, I would grab our children’s Bible and I would read the passages like I was preaching. I would pretend there were people sitting in the empty couches in front of me and give them my best reading efforts!

Now I write devotions that thousands of people all over the world read, it blows me away that this dream was planted so early in my life.

Application: Josiah became king when he was eight years old! Sure, I’m not sure I would have liked this responsibility at such a young age, but it’s a good reminder to us all that we can have an impact, no matter how old or young we are.

Josiah was dedicated to God and made some incredible inroads into helping the whole nation follow Him. Let’s not underestimate the faith of young people. They may be a little more idealistic, but they also have an incredible connection to God’s creativity and imagination.

We are a whole community of faith, every person can play a part. Let’s help every age to extend themselves in their responsibility of being a faithful disciple.

Prayer: Lord, thank You for showing Your love and commitment to us in our youth as well as our adulthood. May we aim to worship You wholly, no matter what our age. Amen.