Living On the Street At the Sanctuary 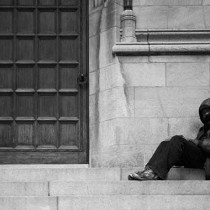 Reference: They recognized him as the same man who used to sit begging at the temple gate called Beautiful, and they were filled with wonder and amazement at what had happened to him. (Acts 3:10 NIV)

Explore: A minister friend of mine was wanting to encourage his congregation to be more like Christ by helping those in need. So instead of just standing up the front and preaching about it, he devised a plan that was guaranteed to have an impact.

Before the Sunday morning service began he asked a mate to sit out the front of the church building. His mate was not known to anyone in the congregation and, while he was usually a well dressed man, he was asked to wear dirty, torn clothes and sit on the ground outside.

As the congregation started turning up to the service they were confronted with this slovenly man, sitting out the front of their place of worship. The response was interesting to observe.

Most people stepped over the man, ignoring him completely as they entered into their time of worship. A couple of people gave him a few coins when he asked, smiled, then walked on.

Not one person offered him more than a few coins and no one invited him in. You can imagine their discomfort when he walked in once the service had begun.

He found a seat and sat on his own and while every eye had been on him as he walked in, no one moved seats to accompany him. I’m sure that their discomfort quickly turned to guilt when he was invited up on stage, during the sermon, and the whole exercise was revealed.

While we sing about living like Christ and being His hands and feet in our world, when it actually comes to putting it into reality, we often fall short. I don’t think this congregation would ever have looked at a homeless person in the same way again.

Application: We don’t often have great wads of money to help others, however, genuine help is not connected to cash but to care. Peter and John, two disciples of Jesus, were walking into the temple and noticed a lame man sitting near the entrance.

Because the lame man was so used to people walking past him, Peter and John had to actually get his attention just to talk to him. It seems that maybe society has not changed that much over 2000 years.

Peter and John had no money and probably very little social standing either. The rabbi that they followed had been killed, and while there were rumours that he had risen from the dead, nothing had been proven.

What they offered him was far greater than earthly resources or human physicality; they gave him Christ. And his life was completely transformed.

We may not think that we have the resources to assist others, but if we stay true to our faith and express Christ in our actions, then everyone’s life will benefit.

Prayer: Lord, there are times when we feel out of our depth and unsure how to give assistance. May You open our hearts to be Christ to everyone we come across. Amen.

How do you respond when you see someone in need?