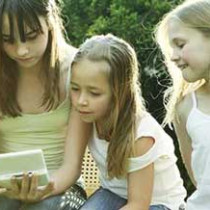 Reference: v.8 “Still other seed fell on good soil. It came up, grew and produced a crop, some multiplying thirty, some sixty, some a hundred times.” (TNIV Bible)

Explore: When I first started my primary school chaplaincy, I started a group we called ‘Babes’. It was for the 10-12 year old girls in our local community. Each fortnight we met together, played games, and provided some fun, safe activities.

The aim was to be a positive influence in the girls’ lives as well as create a stronger connection between the school and the church.

My leaders were dedicated and we had lots of fun with the crazy girls who came along – 75% of whom were from the community rather than from within our church family.

We were not very evangelistic in nature, but hoped that the girls would graduate into our youth ministry and would learn that church was not a scary place to be.

Out of all the girls who came through the program – which ran for over five years – only a handful kept an affiliation with us in some way, shape or form. It would be easy to draw the conclusion that Babes was a waste of time and resources.

Nine years later I reconnected with one of our Babes over Facebook. We friended each other and I wrote her a little note on her wall on the date of her birthday to wish her well.

Her response floored me! She thanked me for the birthday greeting and then went on to explain what she had been doing with her life since she left Babes.

She was invited by a friend to another church’s youth group and, as she had attended Babes, she just assumed it was something similar. It was as a teenager that she really heard the message of Christ, she accepted Him as her Saviour and was planning on studying theology at university.

While she did not make a full commitment through Babes she felt that we had played an important part in her spiritual journey.

In the last couple of years she has actually gone on to complete her studies and is now planning a missions trip to Asia. Who would have thought that our simple little program would be the start of such a great spiritual journey?

Application: There is much we can do to build God’s kingdom and, as we work for Him, we never know what the result may be. Jesus helped us to understand this when He told the parable of the seeds falling on the different soils.

Not everyone will commit to a relationship with God, but that does not mean we discontinue throwing out the seed. It doesn’t matter what our ‘seed’ may be, all that matters is that we continue to act out Jesus’ love in all we do.

Kingdom work can often be disheartening, but we mustn’t give up. Be persistent and dedicate all you can to planting more and more seeds.

Prayer: Lord, give me Your patience and perseverance to spread Your Word. Amen.

Which seeds are you planting today?