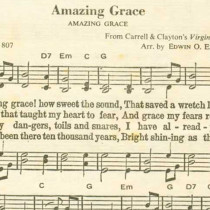 John Newton knew that his life was not perfect

Reference: v.16 Moses did everything just as the Lord commanded him. (TNIV Bible)

Explore: My heart is warmed by the story of John Newton. He was a British sailor and an Anglican clergyman and is best known for writing the song Amazing Grace.

In his early life at sea, he was actually a sailor on a slave ship. After numerous hardships in his life he ended up becoming a priest and an advocate to abolish slavery.

John Newton knew that his life was not perfect, but he worked hard later in life to live in such a way that was true to his religious convictions.

Application: When I was reading through this final chapter of Exodus, I was struck by verse 16: Moses did everything just as the Lord commanded him.

Moses was by no means perfect. There were some moments in his life that he was not proud of. However, that did not mean that he had to throw his whole faith away.

Some people would be able to make a justifiable case against Moses calling him a hypocrite. He killed a man, he ran from his responsibilities, and he acted in such a way at times that even he was not permitted by God to see the Promised Land.

However, God’s grace is so profound that He does not wipe out those who do wrong. If that were the case, God would be very lonely.

We all do things in our lives that show us up to be hypocritical and wrong. But God is not put off by our misdemeanours.  He still loves us, He forgives us, and He still desires a relationship with us.

We have no excuse to not be in a relationship with God. He has made the way clear for us, there is nothing that can stand in our way, we just need to ask for forgiveness and be willing to embrace the life that God has in store for us.

Prayer: Lord God, we will never fully understand Your grace, it truly is so amazing. May we learn to regularly ask for forgiveness, so that we don’t create any barriers between us. Amen.

What are the things in your life that can cause a barrier between you and God?