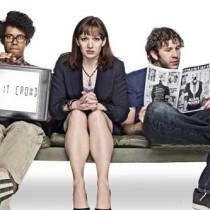 Instead of sitting her down and explaining things properly, everyone just keeps saying, “It’s not for you, Jen.”

Reference: “Go and tell my servant David, ‘This is what the Lord says: You are not the one to build me a house to dwell in. (1 Chronicles 17:4 NIV)

Explore: One of my favourite comedy shows is The IT Crowd. It revolves around two technical assistants in a large organisation and their new manager, Jen. Jen actually doesn’t know anything about computers and it seems that the two techs struggle to communicate their knowledge.

There’s an episode where Jen is trying to broaden her work horizon and puts her hand up for a task she thinks she’d be good at. Everyone who has worked for the organisation for any length of time knows that it’s not a job for a lady. Instead of sitting her down and explaining things properly, everyone just keeps saying, “It’s not for you, Jen.”

Application: When I am looking at plans for the future I am usually looking for things that I will do, not those that are ‘not for me’. When David made plans to build a sanctuary for the Ark of the Covenant, he was told very plainly, “It’s not for you, David.”

David was gracious and understanding in God’s plan. Unfortunately, I’m not always as obedient.

There have been times when I have really wanted to head in a particular direction, but God has communicated to me, “It’s not for you, Linda.” It’s hard not to dig my heels in, but I know that if it’s not right with God, then it’s not best for me. There are times when God is actually clearer about what we shouldn’t be doing, rather than those things we should be doing.

Prayer: God, help us to understand what You are saying to us and obedient when we hear Your voice. Amen.

Is there something in your life that you should be heading away from, rather than heading towards?