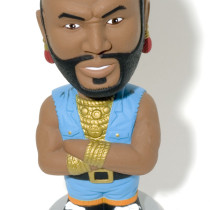 While Mr T is quite a strong character I never realised how Biblical he was!!

Reference:  v.9
Like a thornbush in a drunkard's hand
is a proverb in the mouth of a fool. (NIV Bible)

Explore:  Mr T is an American actor who plays a tough guy with a big heart.  To those who grew up in the 80s, they'll know Mr T from his roles in the 'A-Team' and 'Rocky III'.  For those who grew up in the '00s, they'll know him as the tough guy in the Snickers advertisements.  While Mr T's roles have changed slightly his character and sayings have stayed the same: "I pity da fool!" Mr T can not stand people who are foolish.  He even hosted an instructional video instilling positive values in to children so they would not grow up to be a fool.

Application:  While Mr T is quite a strong character I never realised how Biblical he was!!  As I read through the book of Proverbs, and particularly the 26th chapter, it seems like Godly wisdom also pities the fool.  It is pretty blunt about how useless a fool can be.  Thousands of years ago they said it like this: 'Like a lame man's legs that hang limp is a proverb in the mouth of a fool' (verse 7).  However today we would say, "As useful as a screen door on a submarine." (There are a few other similar sayings, but I thought I would stick with this one!)  If we desire to live a life worthy of God's calling then we need to veer away from foolish behaviour.   It's not just Mr T who despises foolishness but the Bible warns as clearly away from it too.

Prayer:  Lord, you give us life, talents, resources and guidance.  So often we make foolish decisions and waste what you have given to us.  May we hear your wisdom and apply it to our lives.  Amen.

Where have foolish thoughts and ideas crept in to your life?  Who can you talk to about rectifying foolish behaviours?

Thank you for your helpful thoughts on Proverbs 26. I’m using YouVersion to study the Bible and found your blog when I read the note you wrote pertaining to Proverbs 26:9. God bless you! I look forward to reading more from your blog!