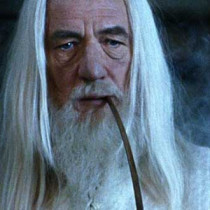 As we travel though life it is important that we have other wise Christians around us so that we can continue to learn from them and receive guidance through them.

Reference:  v.6b-7a  There they met a Jewish sorcerer and false prophet named Bar-Jesus, who was an attendant of the proconsul, Sergius Paulus. (NIV Bible)

Explore:  I know it may seem a bit melodramatic but when I read this passage of a sorcerer using his position as an attendant to try and influence thr proconsul away from God, I was reminded of The Lord of the Rings: The Two Towers.  During this second movie we meet the characters of Rohan and find King Theoden has been weakened by his steward Grima Wormtongue. Lucky Gandalf comes to save the King and his people by sending Wormtongue away.
In this passage in Acts we find Saul and Barnabas doing the same for the proconsul of Paphos.  They are able to show that their God is stronger and more powerful than the influence of a sorcerer.

Application:  Even though the proconsul, Sergius Paulus was ‘an intelligent man’ (v.7) he still had the wrong people around him.
When we need to make decisions we like to hear from those who know us.  Therefore, it’s so important that we surround ourselves with wise people who can give us Godly advice.  I remember when I was thinking of moving jobs at one stage and trying to discover where God was calling me.  When I asked a business man friend he could not believe that I would consider changing job for lesser pay.  He did not understand that money was one of the last requirements when I was trying to discern where God could use me best.  I respectfully listened to his advice but realised that I also needed to hear from those who understood that God was more important than money.  As we travel though life it is important that we have other wise Christians around us so that we can continue to learn from them and receive guidance through them.

Prayer:  Lord, often we truly desire to do your will but struggle to know what we should do.  Help us to discern your wisdom in all we hear.  Amen.