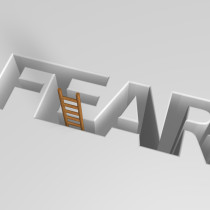 Growing up I had the standard little girl fears.

I was scared of the dark, particularly when I had to go and fill the bucket of fresh rain water from the tank outside and it was already dark. My mother would never know how terrified I was because the tank was literally only 10 metres from the back door. But I would stand out there, all my senses on high alert, in case there was a man lurking in our backyard ready to kidnap me.

Then there were rollercoasters. I assumed I was scared of rollercoasters when I was younger and this was confirmed when I was ten years old and went on the biggest rollercoaster ride in Australia with my dad. I screamed and cried so much that when we got off the ride an attendant came over to see if I was ok. It gave me some comfort finding out afterwards that apparently my dad had been just as scared as I was!

Now I’m all grown up I feel reasonably confident in the dark and am now a big fan of rollercoasters. Research says that public speaking is an adults greatest fear, even over death and snakes, but I’ve always been fairly comfortable speaking in front of an audience.

I must say I’d never really thought too much about fear. That was until I broke my ankle. All I was doing was walking down some wet steps and I slipped and broke my ankle. Looking down at my deformed leg I knew I had done something fairly serious. I suspected I was looking down the barrel of some decent pain but more so some very significant inconvenience.

What I had never predicted was a new found fear of slipping over.

In the weeks that followed I had surgery and spent a great deal of time on crutches. But whenever it rained outside I would want to lock the door and never leave the house. The thought of stepping out on that wet ground outside made me want to curl up in a ball and rock backwards and forwards.

The harsh reality was that I did my injury heading into winter. And living in Melbourne it was going to rain – almost on a daily basis! I also had a baby to look after and staying inside forever was not an option. And so, there was a great deal of serious self talk going on in my head to help me fight my fear.

As I would be driving to my destination, with my windscreen wipers on, I would prep myself for getting out of the car.

“Come on Linda, you can do this. You’ve done it plenty of times before. We’ll just take it easy. Really small steps. Your crutches will hold you. It’s going to be okay.”

And sure enough, once my feet touched the wet ground, I would realise it was not as slippery as the steps I originally fell on, and I would persevere. But the mental combat I would have to fight before stepping out of the car totally took me by surprise. This fear may have been irrational, but it felt very, very real.

2 Timothy 1:7 says that God did not give us a spirit of fear but of power and love and self-control. I have seen how much fear can hold me back, it can be absolutely debilitating. But that is not in the spirit of how God created us. He does not desire for us to be bound up with doubt but to step out in faith so we can do all things in power, in love and with control.

Your fear may be greater than just getting out of the car on a wet day, like mine, and you may feel like you need more than self-talk to get you through. But whatever it is, know that God does not want you to live a restricted life, tied up by your fears. He desires for us to live according to the spirit He has put in all of us – that of power, love and self-control.

How different would your life look if you took away all fear and did everything with God’s power, love and self-control?