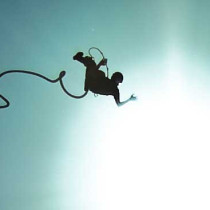 What did they ask her to do, but jump off a platform into a 90-meter free fall towards a rocky canyon!!

Reference: v.4 The guards were so afraid of him that they shook and became like dead men. (TNIV Bible)

Explore: I was recently watching an episode of Australia’s Biggest Loser. It was “Face Your Fears” week and the remaining six contestants were being pushed to their limits.

One of the Losers, Margie, had a huge fear of heights. So what did they ask her to do, but jump off a platform into a 90-meter free fall towards a rocky canyon!!

Margie was so petrified. She was coming up with every excuse in the book in a vain attempt to not go through with this challenge. She said she didn’t want to die, she explained that her mother couldn’t live without her, she outlined how much her pets rely on her, and then she took the personal sacrifice of saying she was too fat to accomplish such a terrifying leap.

In the end, after all the talk and tears, her trainer looked straight into her eyes and asked her one question, “Have I ever let you down before?”

‘No’ was the only answer Margie could give. And so, with a little more encouragement from her trainer, Margie stepped up onto the platform and made the death-defying dive down into the canyon. While she screamed the whole time, she was smiling by the end and so proud of her accomplishment.

Before Margie had come on the show, she would never have even got up on that platform let alone thrown herself off the edge. However, her experience on the show had given her greater courage and shown her that she could accomplish so much more than she ever thought possible.

Application: When the angel of the Lord came to earth after Jesus’ death and resurrection, he made himself known to two groups of people – the guards and the women. They were both terrified of him.

But I noticed the difference in reaction between these two groups of people. The tough, hardened guards, who were set in place to stop anyone from interfering with Jesus’ tomb, were ‘so afraid that they shook and became like dead men.’

The women, on the other hand, were also afraid, however, they didn’t faint or convulse. In fact, the women were conscious enough to be able to take in crucial information and even received instructions from this heavenly being.

While you would have thought the guards would have been braver to handle this situation, it was actually the women who showed more courage.

Why? Because they had already had a relationship with a heavenly being – Jesus. He was their trainer and maybe seeing this angel was a way of Jesus saying to the women for the very first time after His death, “Have I ever let you down before?”

Due to their experience of Christ, and the relationship they had with Him, they were given the courage to endure such a terrifying experience.

Prayer: Lord, there are times in our lives when we also endure times of terror. May we be reminded that you have never let us down before and you don’t intend to start. Amen.

What terrifying situation have you been through? How has Jesus never let you down?