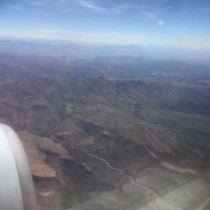 I was recently flying over the state of Arizona in America. It was the first time doing so and I was mesmerised at the look of the land.

Where I live in the south of Australia it is green and filled with so many trees. If you were to fly over you would see all the colours of the different crops in the paddocks, the trees and the grass.

But the countryside of Arizona could not have been more different. It was dessert and you could just see the same brown colour for miles and miles.

While it was certainly very different to home, it had a real beauty to it. The flow of the land was mesmerising and the continuity of its landscape was incredible.

Being high in the air was breathtaking but I then thought about being in the middle of this vast state. What would you do? What would life be like? How would you survive?

But then I saw, from way up in the sky, a cluster of homes. It wouldn’t have been a large city but a township filled with people, cars, industry and purpose. While I could only observe what life was like from thousands of feet in the air, it was clear that people lived, loved and fulfilled their lives in this environment.

It’s so easy to jump to conclusions when you don’t have all the information. It’s so simple to lump that which is different into the wrong category. But that’s what leads to separation.

When we judge something as different and therefore unacceptable to us we quickly become racist or sexist or bigoted.

Jesus was far from these kind of conclusions. In fact He tended to embrace those who were different and those who were unacceptable. He brought them into His community and offered them something they have never experienced – love.

We have the choice though. We could do what comes easily to us and only accept that which is familiar. Or we could be more like Jesus, who accepted and embraced everyone who needed grace and love.

Lord, may we become more like You. Soften our hearts to those who are different and encourage us to embrace those You have already accepted. Amen.

How easily do you embrace the unknown?