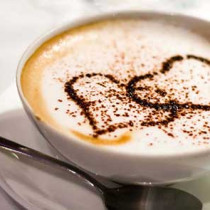 A gentleman once drove up to a drive through coffee shop. He gave his order to the microphoned box and then carried on to the cashier window.

The cashier looked at him confused and said, “You’d like to do what?!”

The cashier hadn’t heard that kind of request before, but he was happy to comply. So he added up the man’s order as well as the order of the car behind. The gentleman paid, received his coffee and then drove away.

The lady in the car behind drove forward to the cashier.

“I’d like to pay for my coffee please,” she said.

“Your coffee’s already been paid for,” said the cashier.

“Yes, your coffee’s already been paid for,” he explained. “The man in the car in front of you paid for his coffee and your coffee.”

“Really?” said the woman. She sat there for a moment and smiled.

“OK,” she said, “well I would like to pay for the car behind me then.” She paid the cashier, took her own coffee and drove away.

The young gentleman in the car behind her drove up to the cashier’s window. “I’d like to pay for my coffee please.”

The cashier just smiled. “Your coffee’s already been paid for,” he said smugly.

“Really?” The young man sat there and smiled. “OK, well I’d like to pay for the car behind me then.”

17 cars later and people were still paying for the coffee of the car behind them!

This story is just like God’s grace. It’s like God is in the car in front of you and he’s paid for your coffee. However, instead of paying for just your coffee He’s actually paid for all your sin and wrong doing. Anything you have done that’s bad, hurtful, selfish or wrong God has already covered you – through the sacrifice of Jesus.

So when you come up to the window you don’t have to pay for a thing. And you can’t repay God because He’s already moved on. He’s paid your price, no matter who you are, what you’ve done, where you’ve been or what you look like. You’re covered.

Everyone needs grace, mercy and love in their lives. You have been given it by God. Your choice is whether you take it and hold it or take it and pass it on.

Lord, the sacrifice You made is incredible. We are so blessed to live under the grace You have offered. May we acknowledge Your grace and be willing to share it with others. May we learn to be more sacrificial in our actions towards our friends, family and acquaintances. Amen.

How have you been responding to God’s freely given grace?