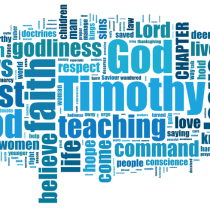 Doogie was a teenage prodigy who became the youngest surgeon.

Reference: “Don’t let anyone look down on you because you are young, but set an example for the believers in speech, in conduct, in love, in faith and in purity.” ‭‭1 Timothy‬ ‭4:12‬ ‭NIV‬‬

Explore: Growing up in the late 80’s I used to watch a show called Doogie Howser, M.D. Doogie was a teenage prodigy who became the youngest surgeon.

While he went to work to fix people’s lives, he came home to ask his parents for the car and hang out with his mates. While this show was for entertainment, it was a great display of age not being a barrier.even though Doogie was younger than all his colleagues, he still made a big difference in his world.

Application: We’re not all child prodigies but I’m sure we have all felt someone put us down due to our age at some stage in our lives. These comments are not often about the younger person but more about the insecurity of the one making the condescending comment.

The Apostle Paul was great at building people up, no matter their age, beliefs or past actions. He was keen for everyone to live out their God-given lives no matter where they had come from or how old they were.

It’s a good lesson for us as well. No matter who you are, you are able to set an example for others to follow.

Prayer: Lord, may we not look to the approval of those older than us but look solely to You. Amen.

What is holding you back from living the life God has set out for you?