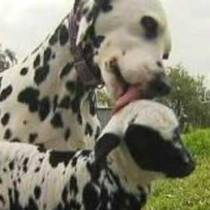 Reference: v.12 Eli’s sons were scoundrels; they had no regard for the Lord. (TNIV Bible)

Explore: Every couple of months there is a feel-good article in our newspaper about a young animal being raised by another species.

I’ve read an article about a Dalmatian dog raising a lamb, a sheep raising a duckling, and even a cat raising a chicken. While these animals are from different species, they are influenced by those around them.

It’s cute to see a lamb follow behind a line of puppies and for a chicken to snuggle into a cat’s fur.

Application: It’s often the same with us humans. When we are surrounded by a certain type of person, we tend to replicate their behaviours. If we are constantly surrounding ourselves with people who listen to the Beatles then our music taste will change towards that of the 60’s, our fashion may even start to incorporate flares, and it would be no surprise if there were a few heavy fringes in the mix too.

While it is easy for us to follow the crowd – just like the animals mentioned in our local paper – it is not always in our best interest. Samuel was dedicated, by his family, to the service of God under Eli the priest. You would think that he would be surrounded by those who upheld God’s law and lived godly lives.

However, Eli’s sons had turned away from doing what was right in the eyes of God. Samuel could have easily been influenced by Eli’s sons. I’m sure he saw what they did, heard what they said, and understood the intent of their hearts. And yet, he stayed dedicated to what was right and holy.

It is much easier for us to be influenced by those around us, however, we still have the choice as to the actions we carry out. Only we can decide how we will live.

It’s important to understand that those around us can greatly influence us, however, our actions are still our own.

Prayer: Lord, may I be aware of the influence others have on me, but may I stand proud on the decisions that I make and the actions I commit. Amen.

Who has been an influence in your life?