Come For A Meal 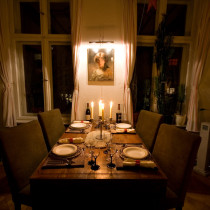 Having only been at our current church for 18 months I still feel there are many people I don’t know. There are some that I connected to better than others but I felt there was only so much I was able to get to know people within a Sunday service.

So I have decided to make more of an effort to get to know people outside a Sunday morning. For us, this usually means inviting people over for a meal.

The other day we had a great family over for dinner. I told them that I was keen to get to know them better and that is what prompted the dinner invitation. They were so happy to come and had just assumed we were so busy getting invited to other people‘s homes.

They realised how wrong their assumption was.

In fact, we had had very few invitations. I was starting to think we had bad body odour!

But it seems that people are busy and, like me, usually wait to be invited rather than being the ones that invite.

When Jesus was on earth he was invited to a lot of people‘s houses, for lots of different reasons. But the people he opened an invitation to were those that were often on the margins and left out by society.

Let us not be too selective as to who we invite into our world. You will be surprised how many people are waiting and keen for an invitation.

Lord, even though we are broken, sinful, and wayward in our faith you still invite us in. In accepting your invitation may we extend it to others. Amen.

Who can you be inviting today?