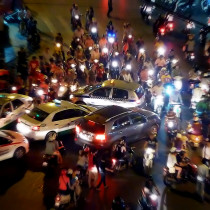 Traffic rules seem to be more of a suggestion than a stipulation.

Reference: “I say this as a concession, not as a command.” ‭‭1 Corinthians‬ ‭7:6‬ ‭NIV‬‬

Explore: When you drive a vehicle in Australia you have to abide by the traffic rules. You learn the rules to get your licence and there are signs and lights to guide the traffic.

As a general rule our roads are well sealed and wide enough for two cars to drive down. In our cities and freeways they often have multiple lanes for vehicles to drive on.

If you live in a country similar to Australia you might think I’m crazy outlining these obvious facts. However, if you live in more heavily populated countries, your traffic may be quite different to ours.

I have been to Vietnam, the Philippines, Kenya and Tanzania and their traffic is very different. The roads are often not paved and there are cars, trucks, motorbikes, pushbikes and pedestrians everywhere.

Traffic rules seem to be more of a suggestion than a stipulation. Traffic flow is often governed by horns honking rather than rule following.

To begin with this style of traffic seemed like absolute chaos, however, there was method in their madness and traffic generally travelled slower as there were not the wide lane roads to speed along.

Sadly, even though people are supposed to follow the rules in Australia, there are still many accidents and deaths on our roads.

Application: There are times for rules and times for suggestions. I would have to say I’m much more comfortable travelling on roads where people abide by the rules rather than seeing them as suggestions.

But there are times when sticking to a structured set of rules inhibits creativity and exploration.

If people had have stuck to the existing rules we would never have electricity, the internet or medical breakthroughs.

I think when it comes to rules and breaking them we need to look at the impact it’s going to have on other people.

The reasons we have rules are to protect others and keep harmony.

I thought it was interesting in 1 Corinthians that Paul shared his thoughts on certain topics but was careful enough to say some things were his opinion, not necessarily a direct instruction from God.

We need to be sensitive to what we perceive as God’s law and what is just an opinion on how to live within a certain period of time. All suggestions can be helpful and learned from, but I think more harm can be done when we stick rigidly to one way of thinking. This often leads to judgment rather than love.

Let’s be mindful of what we confess as Godly and what we perceive as a better way to live.

Prayer: Lord, You are wise and just. May we be able to draw from You the best way to live and not pass judgment on other people’s lives. Amen.

What is a rule you live by and what is just a good suggestion that you’ve taken on?