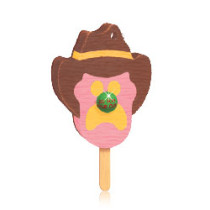 We had both been very careful not to disturb the bubble gum nose but to eat the ice cream around it.

Reference:  v.7  So I went to Perath and dug up the belt and took it from the place where I had hidden it, but it was ruined and completely useless. (NIV Bible)

Explore:  In one of my very first sermons I told a story about my sister and I eating a Bubble O’Bill.  For those who have not had the great fortune to have one of these, a Bubble O’Bill is an ice cream on a stick, shaped like a cowboy with a ball of bubble gum as his nose.  My sermon was about sacrifice and that true sacrifice was giving up something that you really do want.  My sister and I loved the Bubble O’Bill ice cream but our favourite part, which we always left until last, was the bubble gum nose.  We had both been very careful not to disturb the bubble gum nose but to eat the ice cream around it.  However, in the clumsiness of my youth I accidently knocked the ball of gum and it fell to the ground and rolled down a drain.  I was devastated!  What was the point in spending all our pocket money on a Bubble O’Bill if you didn’t get the gum at the end?  And so my older sister took the gum off her ice cream and gave it to me.  True sacrifice!  When I told this story during a sermon I was hoping to illustrate true sacrifice.  What I didn’t realise was that people would remember that illustration for years afterwards.  In fact, 10 years later when I left that church, one of the families presented me with a Bubble O’Bill at my farewell service.  They still remembered the visual illustration!

Application:  An applicable visual illustration can have a greater impact than thousands of words.  The best teacher who used visual illustrations was Jesus.  He always explained his point by linking it to something that was already known to the people.  And it looks like He got that skill from His father!  In this passage in Jeremiah we hear God instructing Jeremiah to do something with a belt to illustrate the fate of the people of Judah.  Deep theological analysis is helpful at times but if we want to communicate a point, whether it’s in a sermon, classroom or boardroom meeting, a visual illustration can go a long way.

Prayer:  Lord, help us to be more creative in our communication, particularly when we are telling people about You.  Amen.

It doesn’t matter whether you are communicating with your children, colleagues or friends we all try to get a point across at some stage.  How can you communicate more effectively?