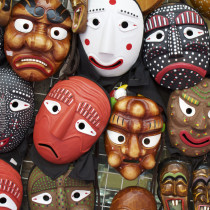 Often blending in looks appealing, and it’s not always wrong.

Reference: “The messenger who had gone to summon Micaiah said to him, “Look, the other prophets without exception are predicting success for the king. Let your word agree with theirs, and speak favorably.”” 1 Kings‬ ‭22:13‬ ‭NIV‬‬

Explore: A friend of mine was coming up to a significant birthday. When I asked him if he was going to have a big party his answer surprised me.

He confessed he would never be able to have a large party because he has so many different circles of friends. It wasn’t that they wouldn’t all get along, but that he wouldn’t know how to act.

He behaves so differently depending on who he is with at the time that if all his friends were together he wouldn’t know who to be.

Application: While being versatile and amenable is one thing, changing your personality for other people is quite the extreme.

The prophet Micaiah was encouraged to change himself for the sake of the current King. It was suggested he just go along with all the other prophets so he would blend in.

It’s no surprise that God’s chosen prophet did not just blend in with the crowd because it would be easier! Often when God chooses us we are asked to stand apart, not just change with the crowd.

Often blending in looks appealing, and it’s not always wrong. But when it comes to changing our beliefs and our character to fit in, then it might be time to double check who we are standing for.

Prayer: Lord, when You were nailed to the cross You stood for all humankind. May we be bold enough to stand for You in what we do and what we say. Amen.

If someone listened to what you said today, what would they think you were standing for?