An Office That Works 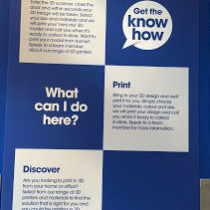 My husband recently had to get some things done at Officeworks. Over the course of two days he spent a couple of hours in the store and interacted with numerous staff members.
As he finally completed his work he left the store reflecting on his time there. He was so impressed by the staff and their positive attitude, even at times when they were met by cranky customers who were in a hurry.
He thought about jumping online to tweet Officeworks head office but worried his message wouldn’t get back down to this level. So he turned around and went back into the shop to ask for the store manager.
He found a female staff member who he had interacted with numerous times. She had been the friendliest most helpful staff member and had a great sense of humour.
He asked her who the manager was and it just so happened to be her. He told her about the hours he had spent in the store and how impressed he was with the staff there.
She was so happy to hear this. So often they only get told the negative things so it was lovely to hear the positives too.
As my husband told me this encounter of his day it reminded me of two important things:
Both these reminders show that we do have an impact on other people. We can either chose for that impression to be positive or decide to be indifferent about how we make people feel.
People will leave feeling differently after meeting with you. Jesus once said that people will know if you follow Jesus by your love. If you love others then it speaks volumes of who you are committed to.
May we live in such a loving positive way that it can never be deniable as to who we worship.
Lord, You had an incredible impact on people. After they met you they were never the same again. Help us to be more conscious of how we impact others. May we work towards being a positive impact so that people may know we follow You. Amen.
Would people recognise you as a Christian by your actions?