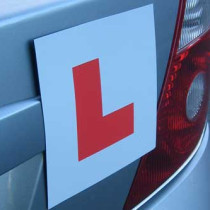 Sometimes it’s important to use your head rather than follow the crowd.

Reference: Day after day men came to help David, until he had a great army, like the army of God. (1 Chronicles 12:22 NIV)

Explore: My daughter is learning to drive, and the other day I took her for a lesson.  Joy has been doing very well, looking at her mirrors, staying on her side of the road, and giving way at intersections.

Her biggest downfall is speeding. Already she has a lead foot and forgets to look for signs that indicate the current speed limit.

On this particular day, we were driving down a nice wide road, following a few cars. As we went through some road works, the speed limit quickly dropped from 70 km to 40 km. The cars in front clearly didn’t feel the need to slow down, and so, maintained their original speed. So did Joy.

I asked her, “What’s the speed limit here?” “I don’t know,” she replied. “It’s 40.” “Oh,” she said and started slowing down. I highlighted the road works that we were passing through and said that there were two signs indicating the change of speed limit through this area.

“The cars in front of me weren’t changing their speed,” she said in her defence. I explained the importance of not just copying the car in front of her, but making her own wise decisions on the road. Just because another car is doing it, doesn’t make it right.

Application: Sometimes it’s important to use your head rather than follow the crowd. It can often be the harder choice, but it’s usually the right one.

When King Saul was in power he started to do some wrong things. It was against the law to defect from his rule, and yet, some mighty warriors decided to leave him to follow David.

We know that David was chosen by God, but had not yet become the person in power. These warriors would have had to leave their secure homes and become outcasts to follow David, but they did it because they used their heads instead of just following the crowd.

The same can be said for the early church. To follow Jesus was to defect from the power at the time and to take a different road from the synagogue. Thankfully for us Christians today, the wise and courageous people in the early church were willing to step outside the norm.

In my culture the norm is to build your wealth and care for yourself. However, that goes against who God calls us to be. He wants us to build treasure in heaven and care for others.

It takes courage to stand up against the norm, but it can lead to a life filled with purpose and eternal destiny.

Prayer: Lord, give me the strength to do what is right, not just what everyone else is doing. May I have the discernment to know when to hold my ground. Amen.

How have you gone against the norm to hold your integrity?

Following the majority is always right and as believers of the Almighty God who sent the Holy Spirit to indwell in us,He will help us discern whatever is in front of us. A best example the Israelite who followed the decision of the 10 spies sent by Moises to Canaan, what happened?