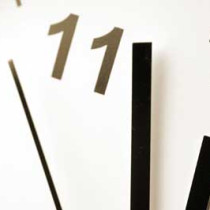 “Do not leave it to the last minute.”

Reference: v.19 But the people refused to listen to Samuel. “No!” they said. “We want a king over us. (TNIV Bible)

Explore: Every time a teacher set a large assignment to us students, they would always conclude their explanation of the task by saying, “Do not leave it to the last minute.”

We would look at the assignment set for us and shake our heads and say, “Of course we wont!”

However, most of us would fail to see the urgency in being organised and prepared and we would end up jamming the huge task into the last couple of days. There would be many cries at the injustice of the task, the difficulty of the assignment, and the harshness of the teacher.

Some students would even ask the teacher to issue an extension on the due date to ease the pressure. But if the teacher was able to identify the tardiness of our commencement, realising that we had not heeded her warning, she would give no mercy.

This would lead to more cries of injustice and an ‘all-nighter’ to complete the task.

His people had experienced the crushing power of a foreign ruler, so when He freed them, He decided that He would be their king. They had a group of people set aside to help guide them and keep God’s law.

When they turned from Him, God sent prophets to lead them back to the way they should have been living. However, they were often ridiculed and rejected.

So the people cried out for a king. They demanded of their ruler – the great almighty God – that He place a mere human to be head over them.

God warned them of the consequences, but they did not listen. They had in their heads that they wanted a human ruler. God gave them fair warning, saying, “You’ll come to me asking me for relief from this King,” but when the people persisted He relented and gave them what they asked for.

Not to ruin the ending of the story, but there’s no surprise for you to hear that God was right. The king He appointed was strong and powerful but the people, in time, cried out to God as they felt the king was doing wrong.

Just like our teachers rarely gave out extensions, God often allows the consequences of our actions to have effect in our lives too. He’s not Superman, who comes swooping in to pick us up out of a situation.

God loves us, and as a good teacher, He shows us the consequences of our decisions. If we want to know how to stop ourselves from getting into tricky situations, the key is… Listen to God in the first place!

Prayer: Lord, just like a teacher, You give us fair warning. Help us to heed Your word to anticipate the outcome of our behaviour so that we can make decisions with wisdom and discernment. Amen.

What big task do you have before you? What wisdom has God already given you about it?