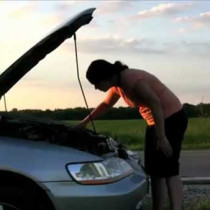 I just didn’t see anything else that we could do but put the hazard lights on and call for help.

Reference: The islanders showed us unusual kindness. They built a fire and welcomed us all because it was raining and cold. (Acts 28:2 NIV)

Explore: A few years ago my friend and I were driving along a city road when her car broke down. She tried starting it a number of times but nothing seemed to work.

It was early in the morning, still dark and starting to drizzle – awesome! I got out and tried to push the car off the main road, but we had stopped whilst travelling up a slope and the car was just too heavy. It took me about 10 mins to move it 5 metres!

It was ridiculous. The traffic was starting to build and I just didn’t see anything else that we could do but put the hazard lights on and call for help.

All of a sudden, out of nowhere, these two men arrived at the car and started to push it up the hill. With the three of us pushing, it was so much easier, and we had the car in the service lane in no time at all.

As soon as we had the car parked, the guys took off and all we could do was yell out our thanks as they headed back to their cars.

We never discovered their names, we don’t know where they were heading or why they stopped to help us, but we were incredibly thankful that they did.

Application: When a stranger comes to your aid, it renews your faith in humanity. These gentleman received no reward for their act of kindness, and yet, they turned a terrible situation around for us.

When Paul became ship wrecked on Malta, he and the whole crew were left with nothing. The native people did not know who they were or what they were doing on Malta, but it’s recorded that they showed “unusual kindness” to them.

I have to admit that I love to get recognition for the good things I do. It makes me feel proud when others notice my good deeds. But all throughout the Bible we are encouraged to, not just help our friends, but to help all those in need.

It’s easy to err on the side of caution as we hear the horror stories, in our current day media, of a Good Samaritan turning into the victim. But let’s draw encouragement from the Bible to look beyond ourselves and reach out to those in need. You may actually be assisting an apostle on a journey.

Prayer: Lord, it’s so easy for us to allow our selfish nature to take over and to only look out for ourselves. But that was not Your design or intention for us. May we live in the way that You desire, by loving others, even if they are currently strangers to us. Amen.

When have you reached out to help a stranger?