A Clear Warning From God 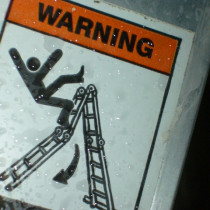 As Linda is on leave, here is one of her most read posts from over the past few months.

He may be young but he understood exactly what I was saying.

Reference: “They were from nations about which the Lord had told the Israelites, “You must not intermarry with them, because they will surely turn your hearts after their gods.” Nevertheless, Solomon held fast to them in love.” ‭‭1 Kings‬ ‭11:2‬ ‭NIV‬‬

Explore: Our two-and-a-half year old was not interested in eating dinner. He was moving around, messing with his food and standing up on his chair.

I told him to sit on his bottom as he could easily fall from his chair. He may be young but he understood exactly what I was saying.

Nevertheless, he did not heed my warning and only a few minutes later he toppled off his chair. Fortunately, my husband’s quick reflexes and close proximity meant he was caught before he really hurt himself.

From that moment on he sat properly on his chair and ate his dinner.

Application: There are times in our lives when we are given warnings. It maybe a health warning or a traffic offence warning or just a reminder of how we should act.

It is always within our power to heed those warnings. Sometimes we get away with ignoring them, but more often than not the consequences hit us hard.

King Solomon was said to be one of the wisest men in the world, but even he didn’t heed the warning of God. It was clear he should not invite women of other faiths into his home, but he did it anyway.

The consequences were huge, for him, his descendants and his whole nation.

God does not give us laws and warnings to make life difficult. He is the wisest of all and knows what is best for us.

Heed His warnings, listen to His laws. If we follow Him we know our lives are on the right path.

Prayer: Lord, forgive me when I stray from Your ways. Give me Your wisdom and guidance to know what is best. Amen.

When have you sensed a warning from God?